Postcard depiction of one of the finest Seaboard Air Line Streamlined Steam Locomotives at the Seaboard Air Line Railway Station at St. Petersburg, Florida, “The Sunshine City.”
This is a linen type card that was popular circa 1930s to early 1950s. Streamlined locomotives and trains began in the early to mid 1930s with the lightweight diesel trains such as the Pioneer Zephyr. By the late 1940s to early 1950s, diesel powered locomotives were in common use for passenger service. This card is likely from the 1930s to 1940s. 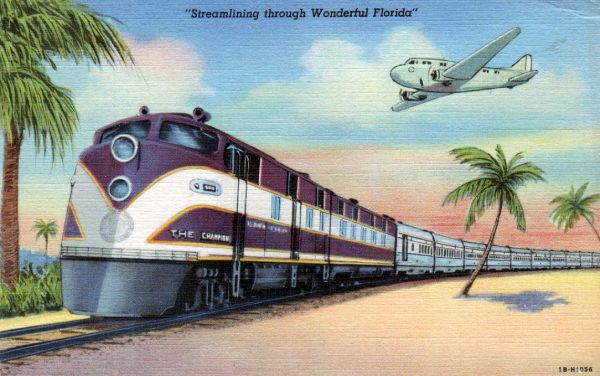 The Atlantic Coast Line operated a fleet of crack passenger trains known as the Champions, between New York and the East and West coasts of Florida. These were some of the earliest and most successful streamliners in the business. In 1939, in response to rival railroad Seaboard’s popular new streamliner, the Silver Meteor, the Atlantic Coast Line launched its first streamlined train, the all-coach Champion. The railroad continued to maintain and improve its passenger service, even replacing old stations with new.